As i sat waiting for New Year's Eve i thought about nothing but the vegan cake i would be eating in a few minutes. I waited, impatiently on my bed looking at my cousins using my laptop. I wore an England football shirt with the colors red and white. The vegan cake, held most of my attention.

As the clock struck 12 and it was New Year we jumped off from the sofa and made a lot of noise of course, i was hungry. Even though that was my case i still made an awful amount of noise. My mom called us youngsters to eat and boy, i was starving. I ran down the stairs as fast as i can with a toy trumpet on my hand, my cousins trailing behind me. After the coins were rolled on the floor for luck we had our meal. 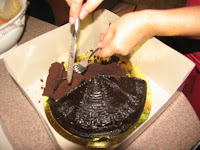 I quickly made my way over to the counter where the vegan cake was placed.  I posted the picture up there. It looked very delicious to me.

I ate it happily not making a sound while my brothers and cousins looked at me and couldn't believe their eyes. A vegan cake. They probably believed that all vegans could eat was lettuce but of course there are a lot of vegan food other than lettuce that we vegans eat. There are other foods like vegan ice cream, vegan cake and vegan snickerdoodles. Nowadays, there are a lot of foods that can be made vegan :)

My cousins and my other relatives tried the cake and they loved it. They were amazed too, they wanted to have another slice. :) It was a very happy new year's eve we sang, played the piano. I ate a lot of vegan food like salad, vegan cake and some veggies. It was very happy.
Posted by Veganism101 at 1:02 AM No comments:

It's been awhile since i last posted here in my blog. Even though nobody is following my blog, even if i'm not sure if someone is really reading my entries i will still continue posting here. So it's 2011, new year's eve has ended and all the new year celebrations too but the new year feeling is still resonating inside me.

As i've been absent from my blog i continue to educate myself about veganism and animal rights. I also continue to study on how to write better works and better posts.

So there, i hope to start another post today as well.
Posted by Veganism101 at 12:45 AM No comments:

Awhile ago i  was excited, sitting in our car waiting for my vegan bars and candy. My aunt sent me vegan bars and candies, she's from Canada. When i received the package containing the bars i opened it with haste. These are the candies and bars: 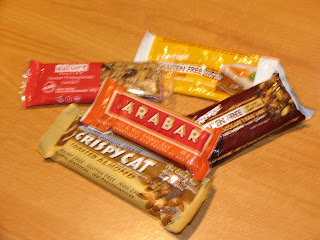 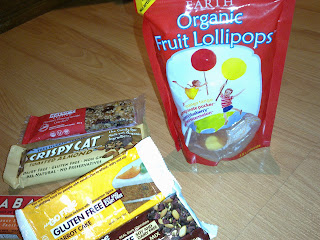 So, it's my first time to eat other bars to tell you the truth i only eat Clif Bars. Clif bars are energy bars packed full of protein.  There are other bars which are suitable for vegans like the Luna Bar. I just wanted to show these pictures in my blog.﻿ :) Advance Happy Halloween
Posted by Veganism101 at 4:49 AM No comments:

So, my blog as you can see are made up of articles. I thought that i should probably post some pictures of vegan food as well. I don't want this blog to be a food blog completely but i also love the idea of writing about animal rights and other vegan things too, not only  food so it would be a multiplayer blog.

I just want to post more blog entries because i find that i don't really put much effort writing in this blog but i will try my best to make this blog a wonerful one.

I'm pretty excited about November being the vegan month because i will also celebrate my first vegan anniversary.:) So, i'm really looking forward to it.

Today, i went to this Vegetarian restaurant called Daily Veggie Cafe... they have vegan food too. It's my second time there. My first time to dine there was during "Hug A Vegetarian Day" and i was with my parents. My parents also had vegetarian and vegan food so i was happy that they loved the food.

I will post some pictures of the restaurant here after my quarterly exams.

November is vegan month and check out the reasons why you should go vegan :

http://www.veganmonth.com/whyvegan.html
( just copy and paste this on your address bar)

There came a time when i needed to take supplements. Supplements are needed, now that you're a vegan and i am too. Supplements help supply enough vitamins and minerals that are needed by the body. A vitamin B12 supplement is important because we can't get enough B12 from plant sources alone.

Where can i get B12 when i'm not taking supplements ?

* Cereals that are fortified
* Soy products that are fortified like :  meat substitutes (veggie meat)
Fortified soy milk
Iron is also necessary to take but i don't take iron supplements. I just eat foods high in vitamin c like orange and kiwi so that iron can be absorbed easily. Iron is needed so that the oxygen can be carried along the bloodstream.
So where else can i get iron?
* green leafy veggies
*whole grains
*nuts

Calcium is another nutrient that is needed so that our bones get healthy and strong. Calcium is also needed for strong teeth.
Where else can i get my calcium ?
* nuts like almonds
*soymilk
* green leafy veggies

Iodine is also needed. Iodine helps in thyroid functions.
Where can i get iodine other than iodine supplements ?
* iodized salt
* kelp

Vitamin D is obtained with sunlight. If you don't always get adequate amount of sunlight then a vitamin D supplement is necessary.

One doctor, i'm not telling who he or she is told me that i'm too young to be vegan. I didn't listen to her at all. I just walked away and said to myself "I can do this, that's your opinion and i can't stop now." I never really found myself stopping i just continued with my vegan journey. I still took my supplements so i assume that i'm perfectly fine.

Lesson for me:
Take the right supplements, follow my heart, save animals and be a happy vegan.

The Benefits of going vegan

People ask me why am i vegan and i told them i do this for ethical reasons and people also ask me what happened to me when i started being vegan. Well, i answered their questions. I tried to tell people that veganism is good for the mind, body and also for the soul.

They didn't want to try veganism because they think it's very hard but when you get into a deep conversation and when the person is interested in what your topic is, which is veganism then you must tell them the benefits.

Some people when they hear the benefits of a specific thing or diet, they would try it.

So when i went vegan there are a lot of things i noticed within myself and how i deal with people and animals. These are the benefits of veganism ( from my point of view)

#6 You're pretty light
I feel as if i can move around easily. I can go from the kitchen up to my room, from my room to the garden and from the garden to my friend's house. I actually never get tired that easily. I have a lot of energy.

#5 Cooking Mama
Ever since i was younger i hated cooking. Whenever i went in the kitchen i would always get shooed away by my nanny or my mom. I was never allowed to cook anyway. I was banned from the kitchen. Now, i'm vegan i learned how to cook meals. My mom allowed me to use the kitchen for baking and cooking my own food. I bought a vegan cookbook called "Super Market Vegan" it helped me be an independent person. Even though i already have the cookbook, i still love our very own Filipino dishes. I tried veganizing Filipino food like Adobo and Lumpia.

#4Snoring-- not!
I stopped snoring when i went vegan. My mom told me that it was because i exercised a lot in the morning during summer and my mom told me that i lost the excess fats. That's nice because my dad and i used to have a snoring orchestra during the night but after i went vegan my dad was the only one controlling the orchestra.

#3 Smoother skin
Because i don't eat too much greasy food after i went vegan my skin became smoother and i had less pimples. I only have 1 pimple right now. I don't use lotion that much because i usually am in a hurry to go to school and i don't have time to put on lotion so even though i don't put on lotion my skin stays smooth.

#1 Helping a lot of animals
I went vegan for ethical reasons. The number 1 benefit of being vegan is that you help animals. That's what matters to me. I've been vegan for 9 months and it's truly a nice thing to know that you're a part of a vegan revolution going on and that you're making a difference in the lives of animals.

Vegan for the animals!
Posted by Veganism101 at 8:38 AM No comments:

Veganism101
I'm a 1 year old vegan from the Philippines. This blog is mainly about the vegan lifestyle, animal rights and books.